The fairy woodland was one of the first projects created, as part of our site regeneration. It would become a magical attraction for all our visitors.

Work started in early 2020, but we were soon hit with a global pandemic and lockdown.

The wonderful team at Secret Garden projects came and assessed the site, and worked with our estates director to plan out the woodland. 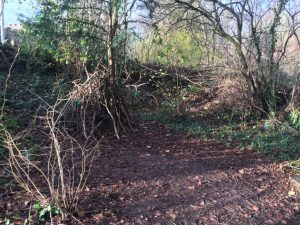 The fairy woodland was designed in mind for children’s groups, and has an activity trail, a fairy grotto with seating area, a Bluebell glade, Snowdrop & Primrose glade and Scilian Honey Garlic glade, an insect hotel, bird, bat and hedgehog boxes, and of course fairy doors amongst the trees!

The fairy woodland is built on a site that used to be the Limes garden. (See the Limes QR Page) 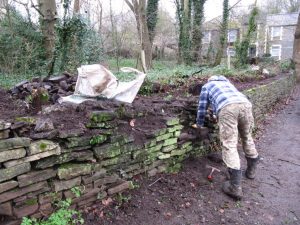 We dug up an old cast iron fireplace, an Archimedes screw (a screw pump used for transferring water from a low lying body of water – the river –  into irrigation ditches) huge pieces of concrete and a lot of fly tipped rubbish.

We dug a trench where the whips for the native hedge would be planted, followed by laying down membrane to suppress competition from weeds. The membrane was pegged down with cuts made through it to plant the trees. We chose a Blackthorn based mix of native hedging, comprised of Field Maple, Hawthorn, Hazel, Dog Rose and Bird Cherry. 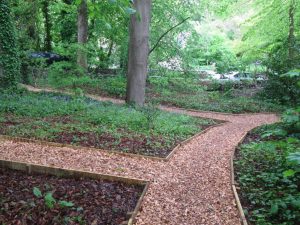 Once the native hedge was planted, we set to clearing the areas that were to be the flower glades. We pulled out the majority of the Ivy and brambles, thinned out saplings that were not needed and started clearing any scrub from the pathways. There is plenty of Ivy, brambles and saplings around the rest of site for wildlife and we were always considerate of habitats and creatures whilst we were working.

Since its completed, the Fairy Woodland has been host to many events, parties, school trips and much more.

Visit our Fundraising Page or go to https://www.gofundme.com/f/willsbridge-mill

We use cookies to ensure that we give you the best experience on our website. If you continue to use this site we will assume that you are happy with it.OK